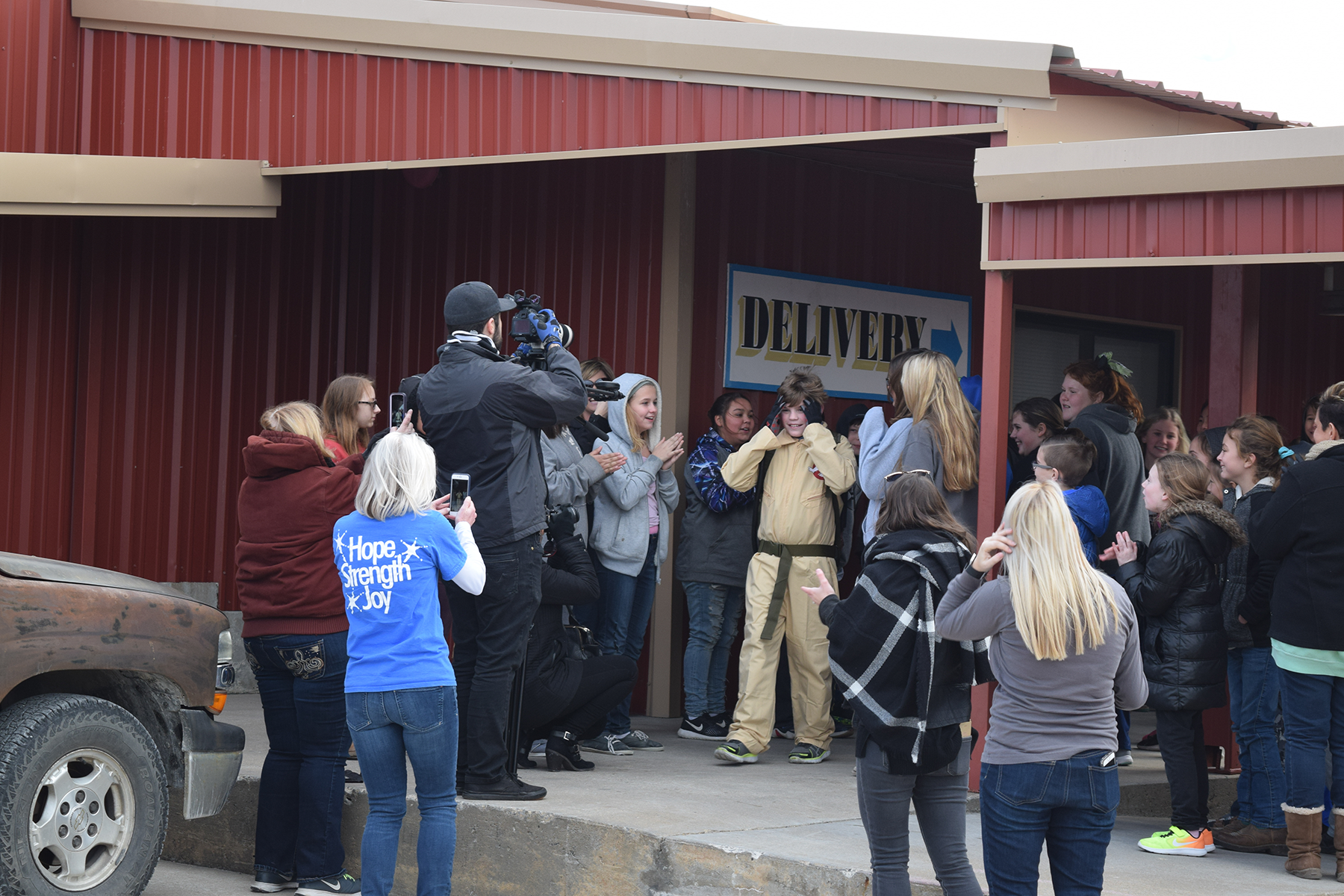 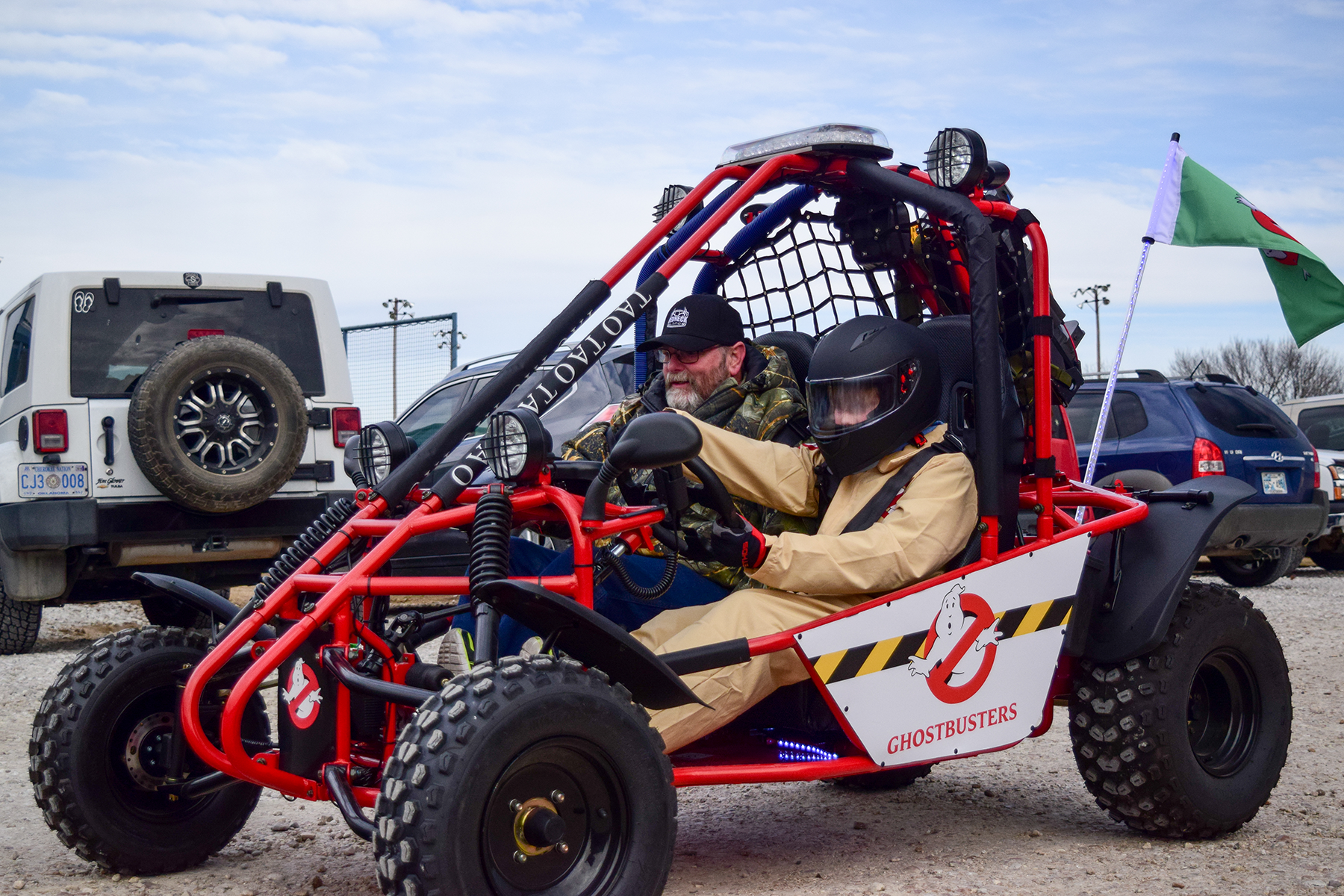 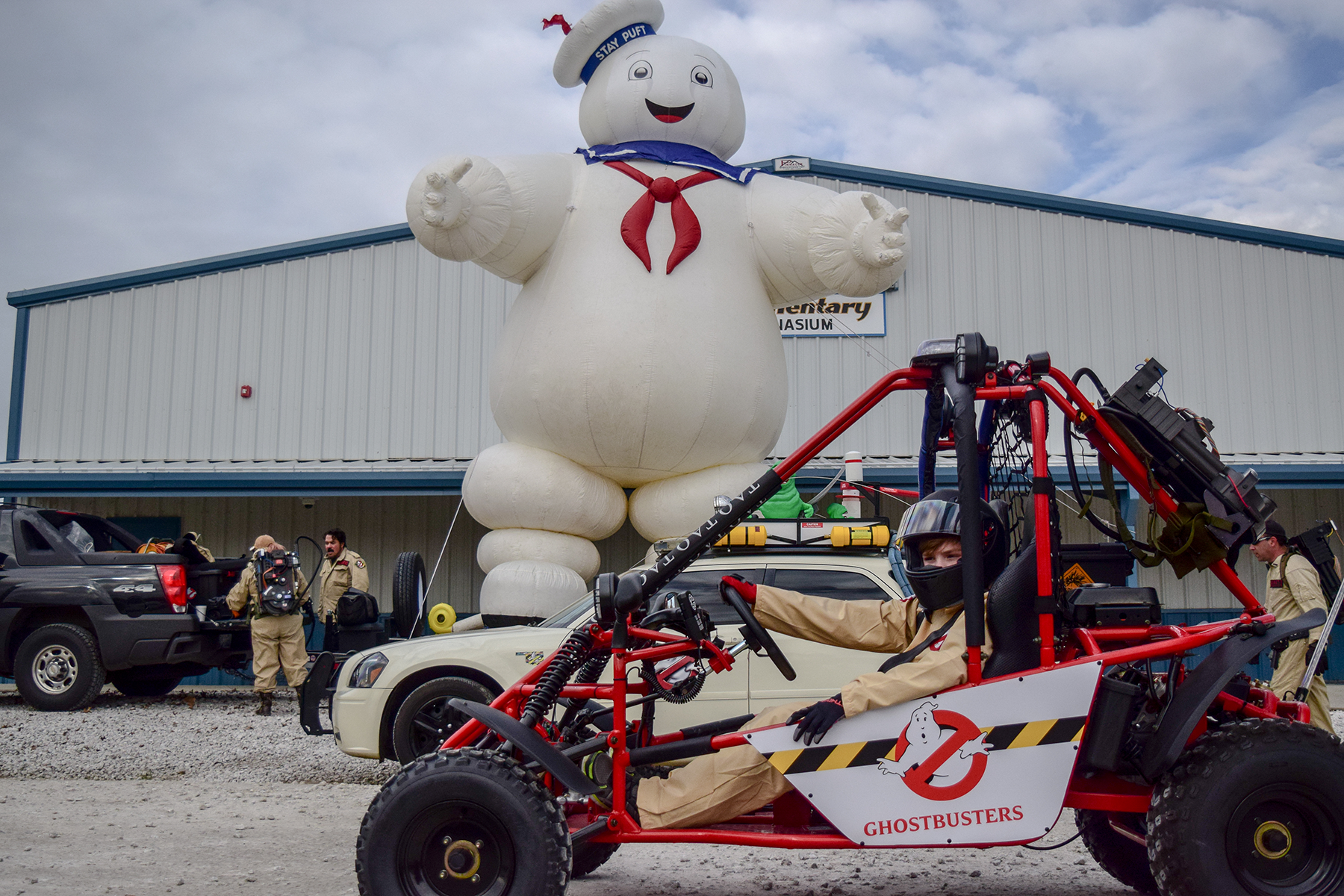 Over the past 12 years Integrity Customs has been able to assist in builds for teenagers wanting their dream car, truck, or SUV. Well, back in November we got a call on a wish we could not wait to build: An Ecto-1 ATV. We accepted the challenge of building a Ghostbusters dream kart for Trevor of Oktaha, Ok.

Integrity Customs is known for making custom changes for people in their vehicles but this was the first time customizing a go-kart was requested. We wanted to make Trevor’s dream become a reality by basing everything we added to his Kart off of the original Ecto-1 from the movie. This one-of-a-kind kart is built with: Custom Ghostbuster edition panels, Underglow LEDs, Gorilla Flag stick, blue light bar, feniex Typhoon hanheld, multi-purpose siren, custom ghostbusters lunch box, and most importantly a Proton Pack and Neutrona Wand.

The reveal of the kart took place on Friday, January 12th at Trevor’s school. The make-a-wish team invites us out to be a part of Trevor’s wish day. The make-a-wish team staged an assembly for the middle school of Oktaha as a “safety seminar” for the reveal. As the seminar went on a volunteer was needed for a demonstration, Trevor volunteered and the host helped him put on his “safety” ghostbusters jumpsuit as the rest of the middle school made their way outside to help surprise Trevor. When Trevor came back to the shock of all his classmates missing, he  checked outside to find everyone, including the entire ghostbuster of Oklahoma team, chanting and cheering as the ghostbusters theme played through the siren of his new Ecto-1 ATV. Trevor was truly in awe as he approached his brand new kart.

Thank you, Make-A-Wish for including us in Trevor’s wish.

Patterson, 12, has cystic fibrosis and was granted his wish from Make-A-Wish Oklahoma to receive a Ghostbusters-themed go-cart.

His cheek-to-cheek smile reinforced the feeling of dozens of on-lookers that he was enjoying what he was seeing.

“I’m happy,” the Oktaha Public School student said after a presentation of the go-cart was made in the school parking lot.

Patterson said he has been a long-time Ghostbusters fan who has seen the movies dozens of times.

While Patterson said he likes about everything connected to Ghostbusters, his favorite aspect is the Proton Pack used in the movie. The nuclear powered Proton Packs counter the negative energy of ghosts with a proton stream of positively charged ions in the movies.

Rounding out the celebration were several volunteers with Ghostbusters groups across the state who showed up in costume, complete with Proton Packs and other ghost fighting items. Raul Rosario, with Oklahoma Ghostbusters, said group members participate in parades, fundraisers and other special events.

“But doing events like this one here today is what we treasure,” Rosario said as he and others visited with Trevor and other students at the school.

Trevor’s mother Tracy Patterson was holding back tears of joy as the events of the presentation unfolded.

“Oh my gosh,” she said. “We’re just so thankful. With his go-cart now, even with his illness, he’ll have freedom like his big brothers who have driver’s licenses so he can drive around.”

While he donned a helmet to drive his new go-cart around the parking lot at school, Trevor was looking forward to getting the machine home to try it out at a little faster pace.

Among those on hand for the Ghostbusters celebration were Francie White and Katie Gallamore from Tulsa who serve as volunteer wish grantors for the state level Make-A-Wish program.

“We’re the ones who meet the family and help determine what the wish will be and then attend the wish reveal or the send-off party if the wish involves a trip somewhere,” Gallamore said.

Those included volunteers like Gallamore and White, school officials, including principal Tanna Kincade, and family members who worked together to make the event special.

Massad said granting wishes for seriously ill or terminally ill youngsters also takes a lot of support from donors and sponsors ranging from individuals to large companies. The mission of the organization is to grant wishes of children with critical illnesses.

They need to have a determination made they are medically eligible for a wish by their physician, Massad said.

“The child’s treating physician makes the final determination of whether a child’s medical condition qualifies him or her for a wish,” she said.

Referrals also can be made by parents or legal guardians of the potential child or family members who have detailed knowledge of the child’s current medical condition. A child also can potentially refer themselves, she said.

Massad said the number of wishes granted in Oklahoma varies from year to year. Last year, there were 224 eligible referrals.

“Our entire staff works very hard to be as cost-effective as possible and our development team works non-stop to bring in funds so every child can receive their wish,” she said. “Last year, we granted 141 wishes to kiddos. This year, we are working hard to grant 145 wishes to kids all across our state.”

In Trevor’s case, Massad said a child life specialist at Saint Francis Hospital made the initial referral for Trevor to receive his wish.